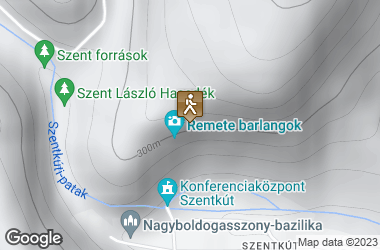 This geosite is open for the public!

Cavities carved during the Middle Ages into Miocene calcarenite by hermits

Geomorphological features: The Hermit Cave, also known as the Stone Hole, once served as a residential cave where people fled during the Tartar and Turkish invasions and were later inhabited by monks. The rock that makes up the cave is characterized by sandstone concretions (“loaf sandstone”) that are sometimes reminiscent of loafs several meters in diameter. These are sandstones with coarser grain sizes than their surroundings, formed in former sediment transport channels. Many times the “rock loafs” popped out of layer line, their location indicated by cavities. Such a spectacular excavation is the rock wall of the Hermit Cave or Kő-hole, where the sandstone rock wall was prepared at a height of about 15 and 30-40 meters in another place, almost 300 meters long. The smaller rock wall excels in the cross-layered structure of the sandstone, which has preserved the belt of the sea’s near-shore surge. In the other rock wall, sandstone loaves and their cooled places can be observed. Some of the cavities were later further carved and dilated. Thus was formed the Stone Hole, also known as the Hermit Cave, which once served as a residential cave.

We managed to photograph the approaching comet C/2022 E3

01/24/2023 3:53 PM
The photo was taken from the roof terrace of the Bükk Observatory by astronomer Erika Varga-Verebélyi, astronomy guide, with a Nikon Z6 with 13 sec exposure time, from a tripod, without a telescope, at 23:30 on the night of 23rd.
Read more