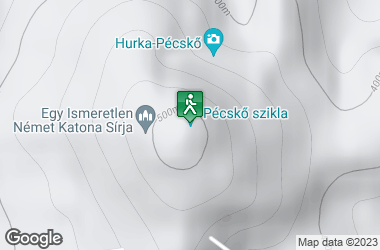 East of Salgótarján the 542 m high Pécs Stone rises approximately 1.5 km away. It is advisable to visit the rock on the Salgótarján - Somlyó mining site - Pécskő ridge route. Approximately a 20 minute walk from the Pécs Stone ridge the marked road (yellow lane) will take you to the top of Pécs Stone.

The volcanic cone of the Pécs stone was created in the Pliocene age (2-3 million years ago) by two stages of volcanic activity. It was the first scattering of debris, from which the main mass of the cone was built. Its material consists of gray, ejected bombs of various sizes, lava fragments, slag basalt tuff, agglomerates. In the second stage, this lava basalt broke through along fissures. One of the fissure fills rose higher than the current peak, which was called Hurka-Pécskő due to its interesting shape. The black, densely textured, well-split basalt was demolished and mined by quarrying. Before the 1930s, there were also five major mines operating in the area, producing basalt for “cobblestone”. It was then that the staircase carved into the rock leading to the cliff was made. According to literatural sources, there was also a cable car quarry on the south-eastern side of the Pécs stone and columned basalt was also mined. From a geological point of view, the so-called Little Pécskő shows instructive exploration. No basalt fracture was excavated here during mining, which means that Kis-Pécskő is the side crater of the large peak, so it received its lava material from its magma chamber. The area was inhabited since prehistoric times. Excavations in the vicinity of the cliff top in 1960 found finds belonging to Pécel and Bronze Age culture. There is no documented mention of the history of Pécs -kő castle. Its ruins are first marked by a map made in 1802. A 1906 castle list lists it as one of the destroyed fortresses. The local tradition held it and it is still alive today that there was once a robber castle on the peak. Although basalt mining partially remodeled the Pécs stone, an archaeological excavation carried out in 1999 described lime-mortar masonry parts and rock-cut walls and stairs. The origin of the small cavities on the north side of the cliff is also unclear, these were natural inclusion outcrops or hive-like niches.

Among the species of the characteristic plant association formed on the basalt rock, the following should be highlighted. On the basalt rock, individuals of the northern spleenwort (Asplenium septentrionale) also occur, and in the planted pine forests, individuals of the narrow buckler-fern (Dryopteris carthusiana) also occur. Fairly isolated populations of the early spring yellow anemone (Anemone ranunculoides) can be found here. In rocky shrubs we can find the roots of the protected Pannonian cotoneaster (Cotoneaster matrensis). The pink barren strawberry (Potentilla micrantha), which can be considered a relict species in the area, is present in an extensive stock in the oak and hornbeam-sessile oaks. The Waldstein barren strawberry (Waldsteinia geoides) is known in the area from the basalt cones of the Pécs stone and the Salgó. The Beard of Jupiter (Jovibarba hirta) also settled on the basalt rock. The rather rare European bladdernut (Staphylea pinnata), which occurs only very rarely and reaches a size of 2 m and is found very rarely in tern-sessile oaks. The Somerset skullcap (Scutellaria altissima) is also present on the rubble slate. The fumewort (Corydalis solida) is represented by rather isolated populations. Hundreds upon hundreds of Golden-tuft madwort (Aurinia saxatilis) grow on the basalt tuff. The Hungarian iris (Iris variegata) is also present in rocky grasslands and rocky shrubs.