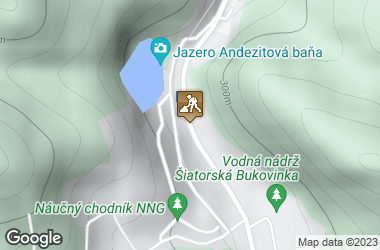 There are three Andesite bodies known in the Šiatorska Bukovinka area. Their composition is almost identical: porphyry piroxene amphibole with andesite garnet and biotite (Sátoros intrusive complex). Garnet grains are particularly striking. This quarry is exposed at the southeastern foot of the second body, Mount Triple Mountain (445), at an area of 600 x 80 m. On the upper side, a vertical columnar separation is observed, which reveals a lying volcanic body (Konečný and Lexa in Vass et al. 1992). Contains inclusions from Veporikum (Hovorka and Lukáčik 1972). t is a fine-grained sandstone or rock flour burned by the bursting hot magma. Therefore, it is much harder than the other sandstones in the mountains. Recrystallized inclusions of the surrounding rocks are found mainly at the edges of the andesite bodies. After the intrusion, the body was subjected to a hydrothermal effect, which resulted in the formation of hydrothermal minerals in the fissures, e.g. pyrite, magnetite, calcite, aragonite, dolomite, quartz and zeolites (chabazite, desmin, heulandite, laumontite, epistilbite) (Erdélyi 1942). The quarry was founded in 1867 and is one of the oldest quarries in the Cseres Mountains.

Currently, the mine site is owned by a private entrepreneur who has set up a pond in a mine in the enclosed area. There is a road leading to the quarry.
Degree of protection: 2, Landscape Protection Area of Cseres Mountains.
smartphone-app